Today, we sat down with Switch Committee’s Ryan Nallen to discuss a new philosophy he’s created to help his improvisation.  It’s interesting to say the least. It’s something he’s personally been doing.  Jeez, let’s just get to it already.

2. What’s something you’ve been focusing on lately?

Names. I’ve been actively forcing myself to name my scene partners.

3. What brought that topic to your attention?

I’ve never been good at names. Even after doing 31 straight days of comedy, I find myself scrambling for a name when I’m in scenes. I recently did a show where a call-back went askew because I never named my scene partner. We handled it by playing it off as a game (multiple people coming on stage responding to the random name I gave in the call-back), but this could have been avoided had I just given my partner a name right from the beginning. It was a note that our coach gave us at the end of the show and I have been kicking myself in the ass thinking about it ever since. It was one of those moments where I knew I did something wrong as soon as it happened.

4. What strategies have you found most effective for working on giving and using names?

I’ve been trying something on my own that helps me to make sure I have a name for my scene partner right at the top of the scene. I call it the ‘ABC’s of Naming’. What I do is come into a scene already thinking of a letter in the alphabet. For example, let’s start with A. If I walk into a scene I immediately know that my partner’s name is going to start with an A so I can say something like ‘Alan’ or ‘Andrea’ right off the bat. I always have two options going into the scene. A name for a male and a name for a female.

5. What if there are multiple people in the scene?

The same mindset follows. So, let’s say we have a 4 person scene including myself. Already going in I’m thinking one scene partner’s name is Adam or Allison, the other is Brandon or Bianca, and the third is Carl or Claire.  I’m going in knowing exactly which letters of the alphabet to pull from rather than thinking about it too much.

6. Do you always start with ABC at the top of a show?

No. I carry it over scene after scene and show after show. So let’s say I did a show tonight, my scene partner’s names might start with A, B and C. The next show or scene (unless it’s a specific call-back to a previous scene), my partner’s names will begin with D, E, F and so on and so forth. You go right up until you get to Z and then you start over. You just have to remember what letter you left off at for the next show. The more I’m doing it the easier it’s becoming. Repetition.

8. How has an improved tool-set for character names affected your scene-work?

It’s forcing me to name my partners, which is essential for the piece  If you’re going to call back a scene or character, one of the easiest ways to do it is by saying that character’s name. Otherwise, you have to point at your partner to come out again, which can take you out of it and might come across forced. The amazing thing I’ve learned about this is that I’m not in my head trying to think of a name for my partner because I already know that it’s going to start with a particular letter going into the scene. This way, I can focus on what’s going on (the relationship) between my scene partner and I without anything else in my mind. I like to think of it as an obstacle course. Naming people is just one of those obstacles that I’m able to jump over quicker now.

Obviously this approach isn’t for everyone. Some might read this and say, “that’s ridiculous, just name your partner” or might be extremely critical of this approach. That’s fine. Different strokes for different folks. It’s just something that I’ve been trying out and it has been helping me tremendously. It’s something new that I’m actively pushing myself to do in every show. My goal is to get through one continuous cycle (A-Z) and reevaluate it. If you’re someone, like me, who has a hard time naming people then give this a try and see how it works out for you. 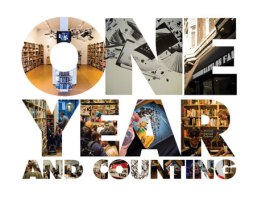 So next month, Switch Committee will officially be 1 years old. Honestly it feels like we just met yesterday. We have had some of the most fun together hanging out and performing with each other. So much that we are still together after one year. It’s actually not that common that an improv group stays together that long. A lot of members will come and go and groups will disband. While we did lose some members, the group never broke up as a whole. To celebrate this joyous occasion, we are hosting a very special anniversary comedy show. We are so excited it’s ridiculous. There’s going to be cake and punch. If the cake and punch wasn’t enough for you then we can promise hi-fives and hugs as well. We have a stellar lineup of opening groups. People who are very close friends of ours and who have kicked serious comedy ass here in Chicago. Check out the link above for specific information for the event.

If you’d like to join us in celebrating our year together as an improv troupe. Or if you’re just interested in some free cake, punch, or hi-fives then make sure you clear your schedules for one of the 2 show dates below:

Opening lineup for the night:

Opening lineup for the night:

You can buy tickets for the show below:

We hope to see you there!

What makes you happy?